Holy chants filled the air, devotees swarmed around a giant idol, Mumbai’s narrow gallis had jazzed themselves into mini amphitheaters, the atmosphere was vibrant and along with it came what seemed to be an indefinite (and seemingly endless) traffic jam, that I was stuck in. Even after pumping up the car stereo volume, having shut the windows, turned my AC two notches up, nothing helped to block the noise! The chaos was inevitable yet contagious. I was instantly drawn towards the celebration and found myself humming along some chants that I recognised - until my boss called and I started cursing the roadblock again. If you haven’t witnessed Mumbai’s incessant energy, then I urge you to buy an air ticket right away and join in the celebrations.

Mumbai upholds a reputation of being a pulsating, lively destination during any festival; but the festival of Ganesh Chaturthi deserves special mention-especially for its sweets!

Here are 5 sweets that you must savour during this festival, in the city that never sleeps.

A plump little white blob that oozes sweet juices made from coconut, jaggery, cinnamon and saffron after just a single bite! Draped in a beautiful dumpling like avatar made from rice flour, Modak is steamed to perfection to bind in the richness of coconut and jaggery, to create magic that your taste buds will never forget.

Remember that temple you go to just for their scrummy sheera? Well, don’t feel  guilty about that. We too swear on its soft, godly and absolutely royal taste that indulges us in ultimate decadence. With the goodness of ghee, semolina and banana, sheera is served as ‘prasad’ after a soulful puja.

Imagine the crispiness of cashew while it is being powdered, the same cashew powder is mixed in a heavenly pool of rose water and sugar syrup. Heavenly, isn't it? To increase its undeniable loveliness, it is dolled up in an edible silver foil making it more tempting than ever. 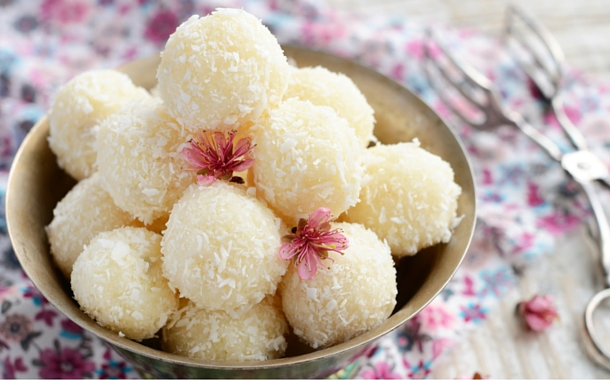 A sweet concoction of just three ingredients - desiccated coconut, sugar, and water, coconut laddoo has a way of making you fall in love with it at the first bite. The sweetness of these white balls will wobble on your tongue the moment you devour them.

If you wanted to know how the labours of love tasted, you’d have to make a puran poli to know. The sweet enticing taste of puran is acquired after the chana dal is sinfully cooked in ghee and jaggery. It is later stuffed in a soft dough, rolled over and cooked on a hot pan with oodles of ghee until the air smells sugary-sweet. We're on our way to grab some sweet treats, are you?