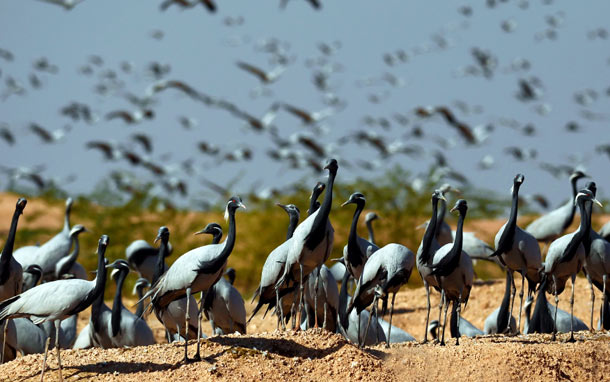 Sometimes, the most memorable travel experiences just need you to go a bit off the beaten path. One such gem is Kheechan, a small village in Rajasthan that has a big story to tell.

An hour’s drive off the busy Jodhpur – Jaisalmer highway, this sleepy little village soared into recognition on the wings of its winter visitors – the Demoiselle Cranes. Every year, between September and March, thousands of these beautiful birds descend upon Kheechan and bring it alive with their cries.

The cranes undertake one of the toughest migrations in the world, flying over the Himalayas from their homes in Mongolia and other parts of Central Asia to this wintering ground in Rajasthan. Standing around 2-3 feet tall and clothed in beautiful grey-blue plumage, these birds are fondly called “Kurja” by the locals.

The most interesting part of their story is that Kheechan wasn’t even a traditional winter ground for these avian wonders. A few decades ago, one of the locals started putting out grain for the local birds to eat. One year, he noticed a few of these cranes amongst the flock. As the years passed, the cranes kept coming in larger numbers until now, when in some years up to 15,000 cranes come to feed off the villagers’ benevolence.

Today, the care provided to the cranes is much more organised. A Chugga Ghar (Feeding Home) has been built, letting the cranes feed in a safe area that is fenced off from harm. This also stops the cranes from raiding the farmlands nearby, turning a potential man-bird conflict into a coexistence. So successful has this endeavour been that Kheechan has been declared a World Heritage Site by the World Crane Foundation. And the musafirs and bird-lovers that come to witness this amazing spectacle also bring in additional income for the locals.

So the next time you’re driving down to Jaisalmer, take the detour to Kheechan. This is one time you won’t regret going ghoomne.

While driving down to Jaisalmer, turn off at Pokhran on the NH 15 and take the State Highway 40. This is the road to Phalodi, but everyone should be able to give you directions to Kheechan and their Kurjas.