Copenhagen is a must-visit destination. It offers you a glimpse into the Scandinavian way of life!

In my pursuit of travelling to off-beat places, Copenhagen, the capital of Denmark was on my ‘1000 Places to Visit’ list. We landed at the Copenhagen Airport, Kastrup on the beautifully spell-binding island of Amager.

A very close friend who is married to a Dane stays in the enclave of Frederiksberg, the de facto trade capital of Denmark during 1950s. Frederiksberg, located in the heart of city maintains a close proximity to a lot of unique places.

Best things to do in Copenhagen

The Viking on the move

Copenhagen is known for its fascinating history of vikings. An erstwhile vikings’ fishing village, has today, evolved into an important metropolis owing to its history, culture and traditions. Our journey started with a visit to a quaint, picturesque fishing village that is known for its fresh and crisp local produce. Enjoy it at a friendly fisherman’s place or parcel the aroma to your place.

Travel to any part of the outskirts of the city and your vehicle passes through beautiful strawberry fields, whose strawberries are easily available at a local store. The taste and quality of the strawberries is extravagantly superior and unmatched.

Carlsberg’s brewery is located in the district of Carlsberg which was just a stone’s throw away from where we stayed. You will see the old vestiges of Elephant Gate and the Ny Carlsberg Brewhouse nestled in this area. Queen Elizabeth, Winston Churchill and the likes have had a pint or two here too. Enjoy Carlsberg at tap and ride along the boats like a pirate. ‘Beer be a good nuff reason for anythin’, Ahoy!’

The second oldest theme based amusement park in the world, located at the beginning of Vesterbro is surrounded by a beautiful lake. The grand performance stage witnesses a synergy of international culture. How the entire world comes alive at one place, is just a wonder!

Royalties of the Dane 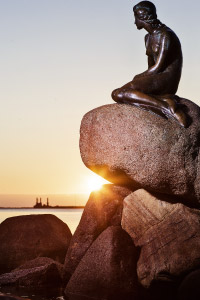 Rosenborg Palace is a small but pretty renaissance palace, surrounded by the lovely King's Garden which is one of the liveliest parks of the city. For entertainment of royal stature, you can try to arrange tickets to watch a play in the beautiful Royal Theatre facing Kings New Square. Another must-see palace is Sorgenfri Palace, which is open to the public. You can also enjoy a small picnic on the huge open plains in front of the Eremitage Palace in the Dyrehaven Park which formerly served as the King's hunting castle.

From Dyrehaven Park, take a bus to the metro station and from there opt for a boat ride to see the sights and sounds of Christianshavn. It’s on this boat ride, along the banks of the canals that you get to see the Church of Our Saviour with its massive spiraling steeple, the Statue of the Little Mermaid, Parliament Building as well as the North Atlantic House, which houses Noma, the two star Michelin Restaurant.

Another highlight of my trip was the drive from Copenhagen to Malmo, in Sweden, through the Oresund Bridge. It is the longest combined road and rail bridge in Europe. Driving from Denmark to Sweden takes an hour on account of this bridge. 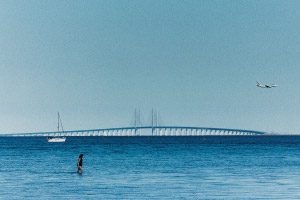 Coming from a country where we have an overload of sensory images, Copenhagen is a refreshing change. You will notice most people traveling to and from work or home on their bicycles.

Use the public transportation systems. Travel in a bus or the metro that enables you to get to different parts of the city. It’s a pleasure to ride both the metros and buses being on accord of their punctuality.

Copenhagen comes alive at night. It is an absolute paradise for a party-hopper. Go party and have the local beer!

Shop at various Flea markets located all over the place and buy souvenirs for your folks.

Eat at the local joints for great budget meals.