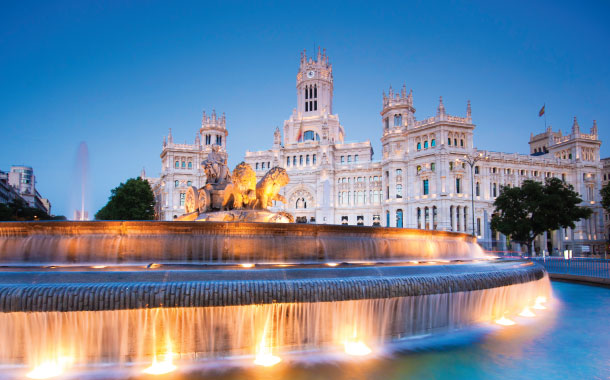 We bring you a list of stars from Spain who made it large on the big screen. From the tennis legend to pop star, here’s a list of superstars born in Spain that made it large in their careers. Read about their native cities and the best places to visit.

‘Nobody goes to bed in Madrid until they have killed the night.’ - Ernest Hemmingway

Madrid, Spain’s capital and largest city is bustling with people, vehicles, shops and boutiques all over. Don’t be surprised if you a see an upcoming musician performing in a garden or in the middle of a street! Arts, culture, history, music, architecture, Madrid has it all.

Tapas bars, cocktail bars, clubs & lounges, flamenco theatres, opera, Madrid is just mad about its nightlife. From opera to rock, disco to flamenco, tapas to fish & chips, Madrid will entice you in every possible way.

Madrid boasts a rich heritage and culture. It has three UNESCO World Heritage Sites - Monastery and Site of the Escorial, University and Historic Precinct of Alcalá de Henares and Aranjuez Cultural Landscape.

Monastery and Site of the Escorial or El Escorial is the historical residence of the king of Spain. Alcalá de Henares or the University and Historic Precinct of Alcalá de Henares is believed to be the world’s first university. The ideal modern community, ‘City of God’ or ‘Civitas Dei’ was modelled on this. Aranjuez Cultural Landscape includes a planned town, Royal Palace of Aranjuez, gardens, rivers and waterworks and much more. The Plaza de Cibeles, a square with marble sculptures and fountains built in neo-classical style has become an iconic symbol for the city of Madrid.

Nestled in the turquoise waters of the Mediterranean Sea, Manacor in Majorca is a small island on the archipelago of the Balearic Islands. Large Gothic-style churches punctuate the narrow streets, and spires of the churches rise above the surrounding low-rise buildings. Majorca has a vibrant nightlife. One may just laze around the beaches and do absolutely nothing or enjoy a beach party in the evening.

Manacor is not primarily a tourist destination, but has gained fame because of the production of artificial pearls. Travellers may even visit the Majorica Pearl Factory Shop and see the entire procedure of artificial pearl making.

Cueves dels Hams and Cuevas del Drach are very popular caves in this region. Cueves dels Hams or ‘Fishhook Caves’ are famous because of the unique stalactites and stalagmites shaped like fishhooks. A lake that meanders down under is called as the ‘Sea of Venice’. Cuevas de Drach, literally meaning ‘the dragon caves’ has four caves called Black Cave, White Cave, Cave of Luis Salvador and Cave of the French connecting each other. In both the caves, there are light tours and multilingual tours. A musical concert takes place followed by a light show imitating the effect of sunrise over a lake. You may also take a short boat trip across the lake inside the cave.

Slow pace, tall spires, Gothic cathedrals and historical museums is what you will first notice in Málaga . Gang of girls, bachelor’s party, family vacation, honeymoon retreat, Málaga is surely one destination catering to many tastes. Golf courses, shopping centres, energetic nightlife, Roman theatres and so much more, Málaga is an unparalled vacation spot with myriad of options. Málaga is also the birthplace of Picasso.

You may take a hop-on and hop-off tour and see the most important landmarks of Málaga . Explore the mountainous town of Ronda and see Plaza de Toros, one of the oldest bullrings in Spain. The region is also known to have best sherry, white and red wine varieties. Visit Museo Picaso Málaga and Museo Casa Natal, the birthplace of Pablo Picasso. At Castillo de Gibralfaro, one will be reminded of Málaga ’s Islamic past.