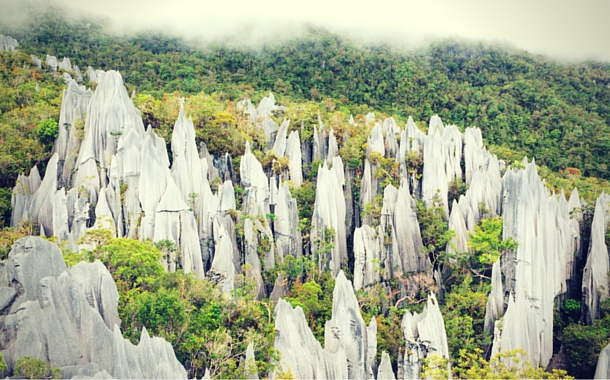 What’s greener than green and more mysterious and thrilling than the bestsellers of the world?

The answer to that lies undiscovered in The Gunung Mulu National Park for it boasts of a series of complex cave systems that lie buried under forested mountains. These passages cover a whooping 300-kilometre stretch approximately. These caves are situated in Sarawak and are without doubt, the most impressive hosts of wildlife! Apart from all this, it was listed as a UNESCO Site in November 2000 for its sheer magnificence. The 2376-metre Gunung Mulu and the 1750-metre limestone Gunung Api cradle between themselves humongous rocky mountains and deep gorges with gushing rivers. For those interested in adventure, the Gunung Mulu National Park is a mystery to solve and a treat to indulge in. For those preferring the beauty of nature and find solace in nature, the national park offers a display of its exotic beauty.

1.The world’s largest cave chamber: The Sarawak Cave Chamber lies here. Its size is equivalent to the size of nearly 16 football fields!

4.It houses a 480-metre long walk way that is called the Mulu Canopy Skywalk and has the best views of the national park.

Getting there: An express boat from Kuala Baram will take you up to Baram River. Embark at Marudi. From there a smaller boat will take you via Long Terawan to the Gunung National Park.