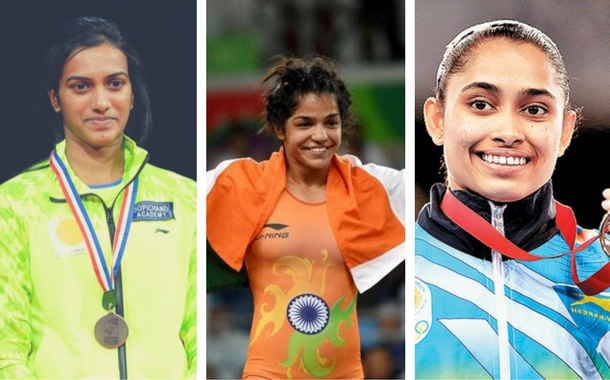 There is no force equal to a woman determined to rise ~ W.E.B. Dubois

The Olympic Games at Rio got everyone glued to the sports channel. The spirit, the hope and cheers for one’s nation make it an inspiring event. Kudos to our three champs - P.V.Sindhu, Sakshi Malik and Dipa Karmakar who earned honour for our country. P.V. Sindhu goes for gold in the badminton, Sakshi Malik won the bronze medal in freestyle wrestling and Dipa Karmakar attained the 4th position in gymnastics. Here’s some of the interesting tidbits of their success stories.

1. Pullela Gopichand: A coach and mentor to Sindhu

Sindhu drew inspiration from the former Indian badminton player, Pullela Gopichand and started playing at a young age of 8. Pullela Gopichand is the winner of Arjuna Award, the Dronacharya Award and the Padma Bhushan.

Coach Ishwar Dahiya trained Sakshi in wrestling when she was only 12 years. She took up a sport, not meant for girls in her home town - Rohtak and competed with boys.

3. Sindhu was born in a family of volleyball players

4. Dipa Karmakar urges that Bishweshwar Nandi, her coach be honoured with the Dronacharya Award

Dipa from Tripura, Northeast India is the first woman to qualify for a gymnastic event at the Olympics. Owing her success to her coach - Bishweshwar Nandi, she wants him to be bestowed with the Dronacharya Award.

5. With her never-say-die attitude, Sindhu daily begins her training at 4 am

Sindhu travelled daily around 27 kms to reach the Gopichand Badminton Academy in Hyderabad from her home at Kokapet, Telangana. Her commitment, dedication and years of hard work finally paid off.

6. Sakshi’s grandfather motivated her to become a wrestler

According to Sakshi’s father - Sukhbir Malik, it was her grandfather Badhlu Ram, a wrestler who inspired her to take up this challenging sport.