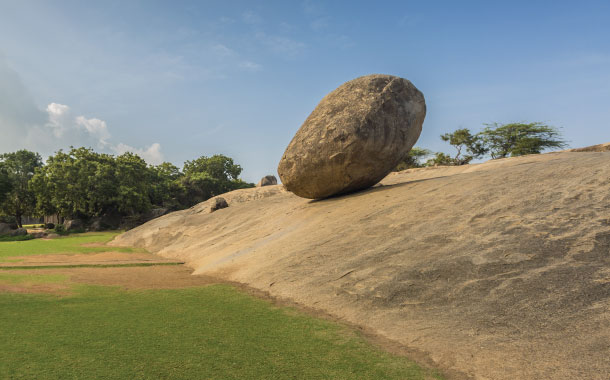 There’s often a thin line between magic, miracle and illusion. While magic and illusion often go hand in hand, miracles are often inexplicable and baffle the human mind. It is safe to say however, that miracles happen for all those who believe, and for those who don’t believe; it’s all an illusion.

Depending on which side of the story you’re on, this rock is both miraculous and baffling. According to the laws of physics, this UNESCO world heritage site at Mahabalipuram is a famous photo stop for tourists and has been at the centre of all mystery for years now.

Known as Krishna’s Butterball, this is a gigantic rock that has balanced itself on a smooth slope, without any visible support. According to Hindu mythology, Lord Krishna had an insatiable appetite for butter and is famously known for stealing butter from the vessels of the neighbouring homes. This habit got him into trouble more often than not, and no story about Lord Krishna can be narrated without referring to his naughty behaviour as a kid. As mischievous as Lord Krishna himself, this rock stands precariously perched on the edge of a seemingly smooth slope, and is attributed to look like one of the many vessels from which Lord Krishna would steal home made, fresh butter! 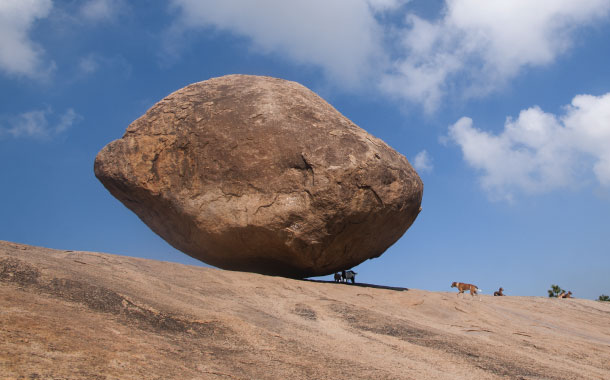 If you had any doubt about unusual attractions stealing the limelight, this attraction which is said to be immovable, has found its way because of its awkward positioning; into the albums of tourists from the world over. This rock is heavier than the monolithic stones of Ollantaytambo, Peru or Machu Picchu. In 1908, the then Governor of Madras (now Chennai), wanted the rock moved - as in his opinion, it posed as a threat to the nearby homes. Seven elephants therefore, were put to the task of pushing the rock over. To everyone’s surprise, the rock didn’t move an inch and the task remains unfinished to this day.

How to get there: Mahabalipuram is a mere two hours by bus from Chennai, and is very famous for its archaeological wonders and coastal beauty.