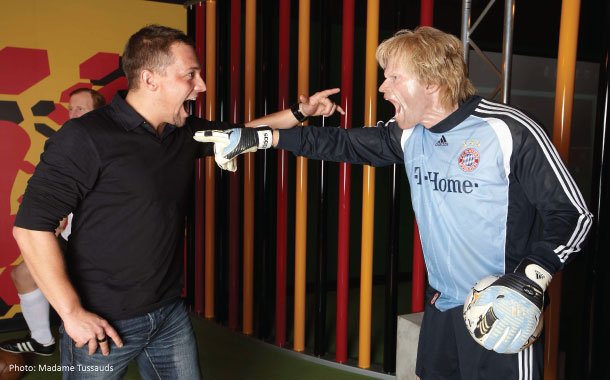 Madame Tussauds, the world’s most renowned series of wax museums that showcase famous and influential people from around the world. There’s a certain uniqueness to the wax museums that whenever you are in the city it draws you for a visit. The best thing about it is that you can pose and run shoulders with your favourite celebrities including Hollywood and Bollywood stars, sports personalities and political figures, only at the illustrious Madame Tussauds Wax Museum. Did you know that Madame Anna Maria Tussaud was a real person serving as a housekeeper for Dr. Philippe Curtius who made wax models to help illustrate anatomy. She picked up the trade and now she is famous for it more than him. You can see Madame Tussaud in her own museum as she did her own portrait in wax just eight years before she died. Here are the top statues you must pose with at the Madame Tussauds.

Come face to face with the legend of Indian cinema - Amitabh Bachchan. With awards more than any other Bollywood actor and a remarkable career for spanning for over 40 years, he was the first Bollywood figure to come live in the Madame Tussauds.

Give an action packed pose or perform a traditional Martial Arts move. Don’t forget to capture the most wackiest pose as you get kicked by Bruce Lee.

If you are a Marvel fan, get thrilled to capture the 4D attractions of Marvel’s superheroes. Pose with the Incredible Hulk, Iron Man and Captain America and have a heroic experience like never before.

Indian heartthrob Hrithik Roshan is the fifth Bollywood star to have his wax statue at the Madame Tussauds. Reportedly, he has made it to the list of top 10 most kissed statues in London's Madame Tussauds museum! If sources are to be believed, at least 20 percent of total kissers are males and the rest are women, mostly under the age of 30. Get yourself clicked with the hottest actor of Bollywood with a peck on his cheek.

The only area where you may see all the A-list celebrities Angelina Jolie, Brad Pitt, Johnny Depp, Tom Cruise and many more in one space. Basically, the famous people in fancy clothes with glitz and glamour which will appeal you to click yourself with them.

So whom are you really excited to pose with? Book flight tickets to London and meet your favourite stars.